What to do when your home’s pipes freeze 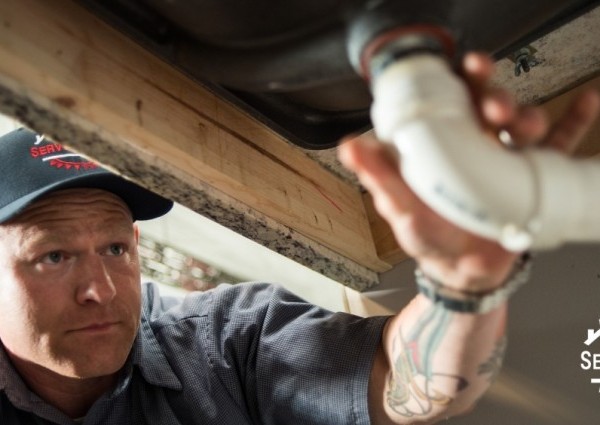 The Midwest is no stranger to winter weather, but when temperatures drop down below -40 with wind chill effects in place, there is very little that one can do but feel confident in their preemptive planning, however, some causes of pipes freezing are out of the homeowner’s control or behind the scenes one may not be aware of.

One of the most common issues in the winter time is pipes freezing. As a homeowner, it is important to take precautions with your home’s internal and external piping to avoid a costly repair and even flooding. It is estimated that a homeowner can spend $5,000 on damages caused by frozen pipes bursting.

Here’s a lesson from ServiceOne’s Omaha plumbers about why pipes freeze and what to do when it happens.

Why do pipes burst?

The common culprit of pipes freezing then exploding is due to simple science. When water freezes, it expands in the container or pipe it is located in, and as pressure builds this is when pipes burst. It’s usually the water inside the tubes to blame for an actual rupture of the pipe.

It is very common for pipes to burst in the winter months without any ice or sweating that has occurred due to the temperatures inside and outside the home.

An example we can all relate to? It’s like leaving a can of soda in the freezer and forgetting to take it out. The liquid inside the can expands and causes it to explode. Water is the same way, it expands when it freezes and causes pipes to burst!

How cold is enough to freeze?

It all depends on where you live and how your pipes are protected. If your pipes are un-insulated and unconditioned, they can freeze. Research states that when temperatures start to fall below 20 degrees Fahrenheit your pipes are in danger of freezing, but this depends on the geographical location of your home.

That's why experts suggest you add insulation around your pipes when the weather starts to reach freezing points. Because the weather can be unpredictable, it’s a good idea to know what to do if they do burst. It’s better to be prepared and have a game plan than rushing and causing more damage.

What to do when your home’s pipes freeze?

1. Turn off your water

2. Turn off your electricity to that singular location

One thing that people forget to do in this kind of emergency, is turn off their electricity where the burst is located. The water could make its way to your electrical source and cause a shortage.

After you’ve done both of those things, it’s time to call an emergency plumber or professional plumber like the technicians at ServiceOne. It’s recommended to have researched a plumbing company you can trust that will get the job done.

Once the damage has been done, it’s time to remove the water. If the rupture was significant, your plumber will likely recommend looking for awater damage professional. Homeowners will want to prevent mold and mildew from building up. If the damage isn’t massive, use a mop or wet/dry vacuum to remove the water.

When you’re having a plumbing emergency, give us a call! We’ll send one of our Omaha plumbers as soon as possible to your home. We’ll be able to inspect and let you know what caused that emergency.

With our team of qualified, courteous ServiceOne air conditioning professionals, we will keep your home or business comfortable year-round! For over 30 years, ServiceOne has been trusted to provide top-notch service to homes and businesses in the Omaha/Council Bluffs metro area and in Dubuque, Iowa.