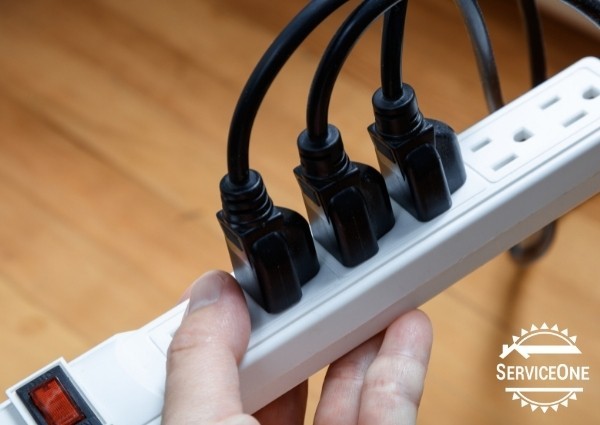 At ServiceOne, all of our licensed electricians are very knowledgeable on how to deal with residential electrical issues whenever they arise. We offer top residential electrical services in the Omaha, Neb, and Dubuque, Iowa areas. In this blog, we highlight surge protector vs power strip, and explain the differences and benefits of each!

What causes a power surge

First, let's discuss what a power surge is and what causes them to occur. In most homes, power flows through your wall outlets anywhere from zero to 169 volts. However, during a power surge, this voltage exceeds 169. So what causes a surge to occur? There are many factors that may cause a power surge in your home. Below are some of the most common factors:

As you can see, there are many ways in which your home can have a power surge. The most powerful power surges, however, usually come from lighting. This is definitely a concern to Midwest homeowners during the summer months. Also, using too much electricity at once can cause your home’s power to surge. Lastly, if none of the other factors are the culprit, you can assume that there was an issue on your electric company’s end.

When looking at surge protector vs power strip, you may think that these two things are similar. Well, you’re not wrong! However, there are a few differences between the two.

Power strips are long electrical strips that usually contain a bunch of outlets in it. This allows homeowners to plug in multiple devices that are in the same area. In a sense, power strips allow for you to plug more than your traditional two devices into a single wall outlet.

Surge protectors, on the other hand, are similar to power strips by the fact they usually contain lots of outlets. However, what makes surge protectors different, and more beneficial, is how it protects your devices from a power surge. Surge protectors have a special circuit that redirects spikes of electricity right into the ground, without going through your electrical device.

So which one is the better option?

When it comes down to deciding between a surge protector vs power strip, it all depends on what devices you are planning to use it with. Power strips offer more outlets than surge protectors, and are a great option for areas with many smaller devices, devices that don’t use much voltage or devices that don’t get used that often. Depending on the amount of outlets and voltage capabilities, power strips range from $5 to $20 on average.

At ServiceOne, our team of licensed and insured electricians can assist you with all of your electrical needs. From repairs to upgrades and everything in between, ServiceOne is here to help. Give us a call today to learn more about our home services. We are happy to answer any of your questions!